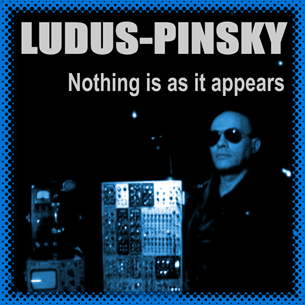 Ludus Pinsky is Lapo Lombardi’s alter ego, a multitalented Florentine artist , well-known in the Italian Reggae/Dub scene. Among others he worked with Ice MC and Il Generale. More recently he’s been sharing Alexander Robotnick’s passion for analog synths , collaborating with him on 2 projects, Italcimenti and The Analog Session.
This is his first solo EP, featuring 4 tracks constructed with analog rigour and a futuristic rather than rétro sound.
Ludus Pinsky develops and assembles himself the equipment he works with to obtain the kind of sound he needs.
The 4 tracks in this EP range from tribal electronics as in “Modular Tribe” to futuristic pop as in “Synthy Craft”, from the film-score-like theme of “Nothing is as it appears” to electronic disco as in “Umma Flute”

Listen to it on Soundcloud

Since the early 2000 he collaborated with Alexander Robotnick in many projects. The most important are Italcimenti and The Analog Session