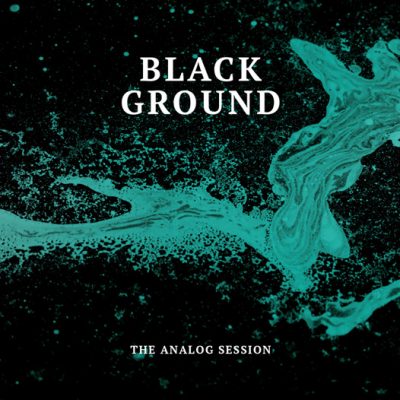 Italian electronic pioneers, Alexander Robotnick and Ludus Pinsky deliver their second album as The Analog Session. ‘Black Ground’ is a journey into electronic music, from the early 70s to modern techno, performed only with vintage analogue synths.

Wires, cables, knobs, keyboards: they are still a vital part of The Analog Session’s improvised world. But as opposed to 2013’s ‘April’ album, ‘Black Ground’ is more dance orientated in its vision. Although most of the tracks originate from improvisation, there’s more editing work on their individual parts so that they sound more structured and danceable than usual.

Initially conceived as a video project (currently with over 320,000 hits on Youtube), The Analog Session then became an album project and finally a live performance. For Alexander Robotnick and Ludus Pinsky it’s not about being nostalgic for an era they represented but is more a progression and improvisation in the present music scene currently dominated by computers. Like the vintage analog gear the pair use, the Analog Session is a living, breathing entity. On the one hand capable of organic brilliance and on the other, breaking down at a moment’s notice.

The new album tracks range from electro-disco to techno, opening up to melody and chord arrangements throughout. ‘My Dream’ for instance is an introspective theme that is developed through different arrangements, alternating with an almost electro-house rhythm. ‘Lonely Dancers’ is made up by a sequence of synth notes whose sound transforms and becomes the backbone of a track that could be perhaps be seen as ‘minimal-electro’ whilst ‘We Are Here’ has a style that’s more difficult to define. As in ‘My Dream’, here too a dream-like theme disrupts the minimal atmosphere that provides the tracks structure.

‘Space Circle’ is built on an harmonic progression of four chords, repeated throughout the track whilst undergoing continuous variations – inversions and substitutions – where the tone-colour of the analog synths fully capture the alternating soundscape. ‘Shure I Like’ injects an element of 80s synth pop with its infectious melody providing a link to the duo’s long-estbalished past but ‘Wild Electrons’ takes us further into future-space as the duo explore the sound potential of the latest (polyphonic) synth assembled by Ludus Pinsky.

dischi
We use cookies to make sure you can have the best experience on our website. If you continue to use this site we assume that you will be happy.OkLeggi di più