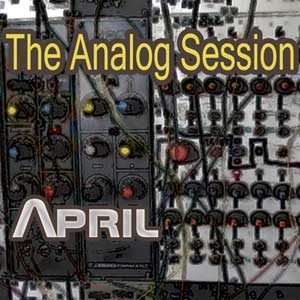 Alexander Robotnick and Ludus Pinsky delivered their album ‘April’ as The Analog Session. A journey into electronic music, from the early 70s to modern techno, performed only with vintage analogue synths.
For many club based electronic music concerts (with the exception of academic or experimental concerts) essentially consist of a couple of artists, usually DJs, fiddling on their laptops, rhythmically nodding their heads along for the duration of the “concert”.
“We don’t know whether such a situation may be called ’live’ but to us a concert is something different. As we are talking about electronic music, obviously most of the music played is ‘sequenced’. This however does not prevent the artist from interacting with it by physically playing different parts and improvising.”
The Analog Session’s natural vocation is the live performance and it was indeed conceived as a live improvisation of electronic music. What The Analog Session bring you is a real ‘vintage synth’ experience with a unique sound that cannot be imitated by any other instruments. Every time they perform live they create a different sound environment all based on interaction with sequences of written notes, modifying their timbre and dynamics whilst playing ad-libed flourishes on keyboard synthesizers as a jazz player would.
“We decided to use vintage synths, mainly dating back to the 70s. Their sound is still unique and cannot be imitated by hybrid synths or by digital synths and even less so by software synths. Such ‘vintage synths’ are still used at many professional studios by electronic music producers; but it is quite rare to see them on stage because of the many technical problems they present: they are very fragile, unstable in tuning and most of all it is impossible to record the timbre and recall it at each track.”
This was the spirit of early synth pop music back in the 70s of which both Alexander Robotnick and Ludus Pinsky have vivid memories from their first entry into the world of electronic music. However, the project does not intend to imitate such bands as Tangerine Dream. Forty years have passed, techno music evolved considerably and both protagonists have been developing long artistic careers gaining vast know-how and skills. It is not so much the 70s music they wish to retrieve but rather its “progressive” spirit as well as the ability to improvise, which has become more and more marginalised in the present music scene dominated by computers.
The new album tracks range from electro-disco to techno, opening up to melody and chord arrangements throughout. From the opening, rolling funk of ‘Ascension’ to the electro shimmer of ‘Effai’ and the tougher edged groove of ‘New Mandarins’ The Analog Session show us there’s still new life left in those old machines.
You can listen and buy it here