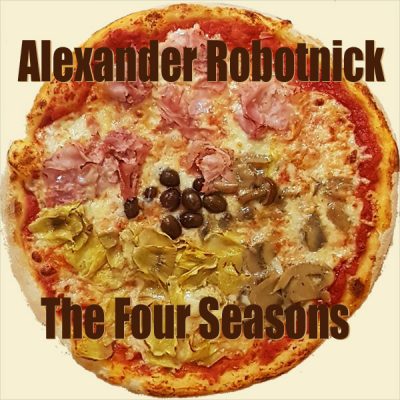 It’s high time for seasoned Alexander Robotnick to tackle an Italian classic: The Four Seasons ….before seasons are definitely wiped out by the dramatically famous climate change. We grew up with a sort of mantra that went: “Seasons are no longer the same…” , a mantra that existed even before we were born. However Winter is still Winter and Robotnick’s desire has always been that of a Winterless year. Therefore The Four Seasons represents a sort of wishful thinking (by contrast).
Four ultra classic titles : Winter, Spring, Summer and Fall. All of these tracks (apart from Winter) share the same origin: : they are born out of three very fast arpeggioes (32mi) where the note sequence is so quick it almost sounds like a continuous chord.
It is impressionist music , without any real theme (except for Fall). Deep House that never falls into style clichés . No parallel harmonies, no one key chords, but a seamless flow that opens into modal scales and finally chill-out listening . Only in Fall the arpeggio sometimes tends to reveal itself , grows frenzied and introduces a somewhat
melancholic theme.
Fall has always been an intense and creative time for Robotnick , animated by a powerful energy flow, probably
to exorcise Winter which is looming on the horizon. In Winter the arpeggio is replaced by a sample from Wagner’s Master Singers that creates a music background with a meditative pace despite the pressing rhythmics.
All tracks composed and produced by Alexander Robotnick (A.K.A. Maurizio Dami) 120 bpm