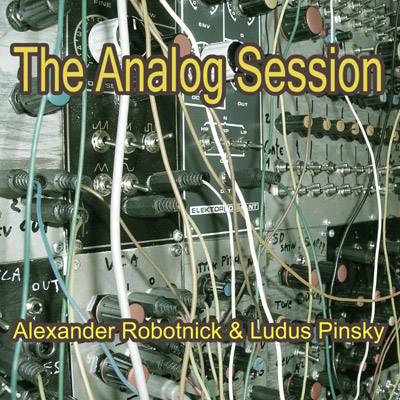 The Analog Session is a music project conceived in February 2009 by Maurizio Dami (aka Alexander Robotnick) and Lapo Lombardi aka Ludus Pinsky. Initially only a video project, it then became also an album and finally a live performance.

The present album has been released in CD/DVD format by This Is Music ltd in 2010. Most of the tracks had been previously uploaded by the two artists on Alexander Robotnick’s YouTube channel.
https://www.youtube.com/mauriziodami
N5 From Outer Space, the first video-clip made by the two artists in 2009 have had more than 1,4 M views on Youtube with consistently enthustiastic feedback. Unfortunately the CD’s original mastering was not really good so they decided to include here only the Video versions.

It is electronic music played on vintage instruments , mostly improvised in the 70s style but with a strong hint to modern techno-music.

Since long electronic music concerts (with the exception of academic or experimental ones) essentially consist of a couple of artists, usually DJs, fiddling on their laptops rhythmically nodding their heads along the duration of the so-called “concert”. There may be a vocalist sometimes but not necessarily.

We don’t know whether such a situation may be called “live” but anyway to us a concert is something different. As we are talking about electronic music, obviously most of the music played is “sequenced”. This however does not prevent the artist from interacting with it by physically playing different parts and improvising.

The Analog Session’s natural vocation is the live performance and it was indeed conceived as live improvisation of electronic music.

Since 2008 we decided to use vintage synths, mainly dating back to the 70s. Their sound is still unique and cannot be imitated by hybrid synths or by digital synths and even less so by software synths. Such “vintage synths” are still used at many professional studios by electronic music producers; but it is quite rare to see them “on stage” because of the many technical problems they present: they are very fragile, unstable in tuning and most of all it is impossible to record the timbre and recall it at each track.

Therefore their use imposes some limits and requires sacrifices because of the lack of memory but on the other hand it opens up the vast and exciting universe of improvisation.

Here it’s not a matter of simply opening and closing mixer channels, launching audio samples and adding some effects – which is more the job of a DJ than that of a musician. At each concert we create a different sound environment, which is improvised and therefore unique, interacting with some sequences of written notes, modifying their timbre and dynamics and improvising on keyboards of our synths as in a jazz concert.

This was the spirit of early electronic pop music back in the 70s of which we both have a vivid memory because we are real veterans of those days.

Our project does not intend to imitate such bands as Tangerine Dreams : 40 years have gone by, techno music evolved considerably and both Alexander Robotnick and Ludus Pinsky have been developing long artistic careers gaining vast know-how and skills. It is not so much the 70s music we wish to retrieve but rather its “progressive” spirit as well as the ability to improvise , which is becoming more and more marginal in the present music scene dominated by computers.

Previous albums by The Analog Session