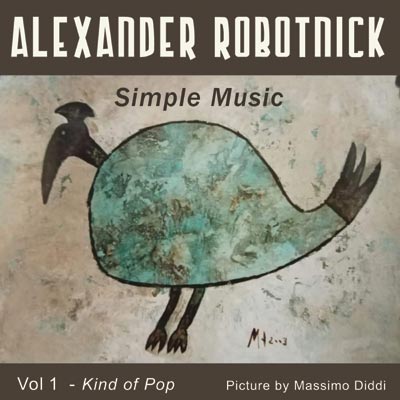 This is Alexander.Robotnick’s new project that will produce 4 (digital) albums. Simple Music “Kind of Pop”, the first title in the series , to be released on December 2 2022, contains 8 tracks , 7 of which featuring the artist’s vocals. Vol2 “Kind of Disco”, VOL3 “Kind of Italo” and VOL4 “Kind of Techno” will follow.

The concept of simple music fits any style of club music. It is born out of the need of combining traditional music parts , chords, melodies and songs (which can be simple indeed) to create variations and keep up the interest in listening. In today’s dance music such interest is usually kept alive or semi-alive by partly rhythmic timbre variations and by introducing some riff while the music substance core goes on and on always identical from the start till the end of the track.

With regard to this point, Alexander Robotnick writes:

“ I am not criticizing this way of proceeding and I totally respect the effort made to create a short piece of music that is powerful enough to go on without ever changing for 4 minutes. The problem is that riffs and grooves are not endless and when you are my age you may have heard them already. I understand this happens to DJs and not so much to the audience. But it’s a fact that I am having more and more trouble to find interesting tracks and ‘cause the risk is ending up with a rather flat atmosphere. So I felt the need of producing  music made of chords, phrases , verses and refrains that may generate simple and genuine feelings in a music genre that otherwise may risk to become more and more boring.

01 – “Babel” – Is a song about the impossibility to understand one another even when we talk the same language and share the same culture.

02 – “It Is So Easy” – here a very smug character in the refrain reveals instead his rather critical situation in the verses. A bit silly.

03 – “Why” – On an electro-disco base the character complains about his lover’s inconsistency.

04 – “Underpass” – It’s a dark vision of a walk along an underpass. It’s made with original Robotnick’s sound from the early 80s

05 – “Virtual Empathy” – It ’s about the empathic feelings induced by mainstream TV to manipulate mass consensus.

06 – In “I Want To Know” Robotnick describes his dreams and wonders about their meaning.

07 – “Intro-Robo” it’s the only instrumental track in the album. Very simple music.