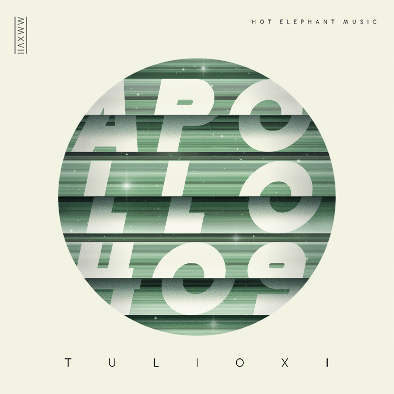 Tulioxi – Apollo 409 Ep (Hot elephant 2017)
Tulioxi is back with his first 2017 release by Alexander Robotnick’s Hot Elephant and it’s a happy return after some years.
Mattia Tuliozi has already published 2 ep’s with HE in the past years and this collaboration with the Label shows a new development in the artist’s composition.
Along the years Mattia Tulioz has always been able to evolve and renovate his sound and his way to compose music: each release that comes out of his studio
is absolutely cutting edge and marks a new step of his journey into musical expression leading to an infinite horizon.

This new appointment with Tulioxi’s music sets up the coordinates of his momentary playground and reveals the styles in which he is focused on right now.
The 2 original tracks that compose this ep are driven by an electric funk bass structure that seems to be Tulioxi’s original alphabet in these days.
Everything melts into trans-genre Indie Disco, built on layers and layers of different suggestions. From the cosmic atmospheres generated by analog brass pads and electronic organs, to the experimental sounds emerging in between the different layers of the tracks.
Made with a large plethora of electronic instruments – from Roland Grooveboxes to old Samplers, including modular synthesis and electronic drum shaping –
the tracks emanate hot and fresh vibes , giving listeners the feeling of something important to dance

Apollo 409 comes with great remixes by some of the major figures in the Nu Disco music scene today, such as Bottin, Franz Scala, Lore J and Alexander Robotnick