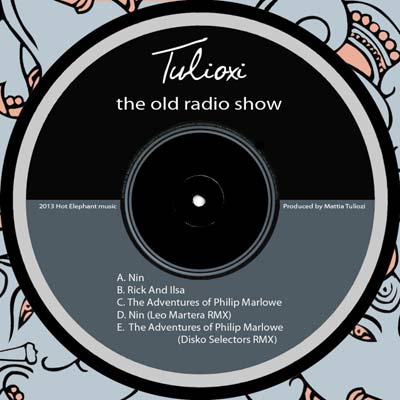 Second Ep By Tulioxi: The Old Radio Show for Hot Elephant Music. This time he wants to get rid of his obsession for the eighties, changing approach and taking a different direction, His main idea is to build a track around an old crime novel or a poem. “Nin” is a Tech Acid House built around areading by Anais Nin from a radio recording in the late sixties, she was reading extracts from her famous diary. Leonardo Martera provide a bouncing groovy remix, with killer drum fills and huge basslines.
“Rick and Ilsa” is a Funky Deep space song about the most notorious triangle in history of cinema, and the most notorious city: Casablanca. The track is driven by a strong bass line played by Piero Spitilli, analog noises, and space arpeggiator give accents to the story’s events.
“The Adventures of Philip Marlowe” is a pumping Techno House that drives you mad like the sound of an old Packard’s engine. the track tells the stories of the coolest private investigator of all times Aired starting from 1947 on NBC. The show starred Van Heflin with a script by Milton Geiger based on the characters created by Raymond Chandler.
Disko Selectors give us an energetic alt. version where kick and funky synth bass dominates