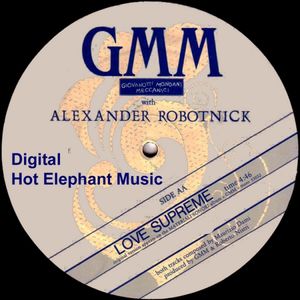 In 1984 Alexander Robotnick joined “Giovanotti Mondani Meccanici”, an Italian multimedia -oriented group, and composed sound-tracks for theatre works, videos and video-installations. For the same group – whose name was later shortened to GMM – Robotnick produced an album (“GMM” by Materiali Sonori) and a single. Its B side “Love Supreme” rapidly became a real “cult” for many DJs and was included in a number of compilations, among which “Desert Island” by Alex Patterson & Norman J. Hot Elephant Music – Robotnick’s label – has decided to make this track available on the digital market, releasing it in 4 versions: 1) Love Supreme (edit) – a simple re-edit by Robotnick for easy use by present-day DJs. 2) Love Supreme (groove) including only the rhythmic part, a useful tool for DJs. 3) Love Supreme (orignal 12″) 4) Love Supreme (original) – the original track from the above-mentioned album. The highlight of this track is Stefano “Cocco” Cantini, a well known Italian Jazz musician, improvising on sax , giving the track its unique flavour and introducing dance music fans to authentic jazz sound. This Robotnick’s work is obviously inspired by the famous track by John Coltrane.

Listen to and buy it here
or here