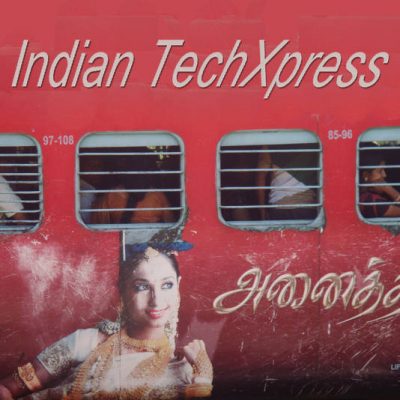 Indian TechXpress
According to data from the 2011 Census, India continues to be overwhelmingly young, with 41% of its population below the age of 20.
Moreover by 2020, the average age in India will be 29 and it is set to become the world’s youngest country with 64% of its population in the working age group.

This indicator points to the widespread vitality of Indian culture in all art field such as cinema, music, design and architecture.
A large young population also means the entertainment industry is rapidly developing and dance music plays a major role in it as the natural social aggregator.
Clubbing is booming everywhere , first of all in the big cities and then also in smaller ones. Numerous festivals , often very well organized, pop up ; many young musicians are active in the field of electronic music.

Indian TechExpress is a sample from the future of electronic dance music. You won’t find much “Indian sound” in it , as traditionally defined. Paradoxically you’ll find more Africa in it. Indian youths look at the world and Africa seems to attract them more than their own music tradition. Most of them are young artists , some actually very young, and very well represent a movement that is developing in the fascinating and creative chaos that contemporary Indian society is.
Indian TechXpress PLAYLIST:

Hailing from New Delhi, Hamza has attained a reputation as a pioneer of the house scene in India and one of the more innovative and exciting producers today. Hamza’s diverse international sound is influenced from his strong musical background as well as growing up in India and traveling the world, living in Paris, Boston, and New York. Early in his journey, exposure to renowned house DJs such as Terry Francis, Dave Mothersole, DJ Heather, and Danny Teneglia inspired Hamza to create his own electronic dance productions. Soon he found a unique style of house music combining deep, tribal, and funky sounds with strong world music influences.
Hamza set up his own label Wind Horse Records to further nourish this growing production repertoire. While in New York, Hamza did his Masters in Music Business at New York University, which gave him a very strong foundation and insight into how to creatively promote his own music. Wind Horse Records, the first Indian house music label, is a major part of that vision. From its first release Wind Horse quickly earned the notice and accolades of many notable fans including Dubfire (Deep Dish), Peter Kruder (Kruder & Dorfmeister), Richie Hawtin, Quentin Harris, and Tom Findlay (Groove Armada). Hamza has used the label to work with some of the biggest names in world music, including Punjabi icon Jasbir Jassi, Tibetan singer-songwriter
Hamza Facebook
Hamza Soundcloud
Windhorse Records

ToneFabrik – From Bedroom to the stage Producer / DJ Omkar Gadre from Pune (India), Has been in the music industry for not too long , But has impacted the masses through his unique ability to shape intriguing sounds which transcends through progressive , techno, and experimental music. Has Shared the stage with big names such as John 00 Fleming , Max Graham , Fehrplay , ANNA to name a few.
ToneFabrik Facebook
ToneFabrik Soundcloud
ToneFabrik Mixcloud

Abhijith Hegde is a Bangalore based DJ/Producer known for his progressive house and deep house moniker Weird Sounding Dude .His discography is growing day by day with tracks and remixes already signed to Traum Schallplatten, Juicebox Music, Bullfinch, WOOD, Mirabilis Records, No Way Records just to name a few. His productions has been receiving support by the likes of Dominik Eulberg, Hernan Cattaneo, Cid Inc, just to name a few. With forthcoming releases planned on some amazing labels. Furtherance, is a monthly podcast curated by Weird Sounding Dude, new episodes of the podcast will be available for streaming every fourth Sunday of the month.
Weird Sounding Dude FACEBOOK
SOUNDCLOUD
MIXCLOUD

NoLatency – Dreams are made of – Composed & produced by Krishnamurthy Ramesh

NoLatency is an Live Electronic music project of Audio Engineer Krishnamurthy Ramesh. Based in Chennai, India, He blends technical wizardry with soulful music and expresses it through his productions. Dreams are Made of was a track made early in his production life and blends glitchy electronic percussion with soulful melodies.
NoLatency Facebook

With a 15 year career as a promoter, label manager, producer, designer & video artist, Varun Desai’s culture work has taken him from Burning Man to Berghain, and as a DJ to tour Poland, Switzerland, Portugal, Nepal and India. Producing concerts for Jazz legends and pioneering underground club culture in his hometown of Calcutta, his sound draws its identity from dance music while his performance pays its dues to those who step onstage to create a live experience.
5Volts on FACEBOOK

Pawas & Unnayanaa – “P-2” – Composed And produced by Pawas Gupta & Prashanth Pallemoni
Pawas Gupta.In the electronica circuit, DJ and producer Pawas Gupta, needs no introduction. Pawas works in that space where melodies, musicianship and atmospheric sounds fuse to create intelligent house. His music resonates his journey back from his early days as a DJ in India to turning independent producer in Germany. From his classical roots in tabla and percussion to his deep, Detroit influence in deeper house, techno and minimal, Pawas has carved his niche.
Unnayanaa (a.k.a Prashanth Pallemoni) strives to translate abstract ideas into a tangible and relatable format for a cross section of listeners. His unconventional approach to morphing sounds into one another using records along with his keen sense of interpreting sound defines his Djing style and music production.
Born into a music loving family, music has always been his sanctum, inspiration, passion & first love. He spent the early years of his childhood listening to his mother’s classically trained voice and the many records his father brought home from his travels along with his grandfather’s collection of spool tapes.
His primary musical influences apart from Indian classical are African & electronic music with a collection that ranges from K.L. Saigal to Kraftwerk and Celia Cruz to Stockhausen. UNNAYANAA’s sound is a translation of these influences and what manifests from this is what he calls “Sonic Attunement”; he aims to connect with his audiences through this state.
Pawas at Soundcloud
UNNAYANAA FACEBOOK

Anubhav Sharma aka D80 has spent years on a certain unwavering vision – to bring his vision of disco to a public. Equally inspired equally by the likes of Lindstrøm on one hand and Sapan Jagmohan on the other, his DJ sets showcase recordings that span eras of disco across different geographies and contexts, while his live production sets focus on his own explorations of the form using synthesizers and analogue equipment. Having grown up in Delhi with a stint in Los Angeles, his recent return to Delhi has seen him bringing this body of work back to India.
D80 Soundcloud
D80 FACEBOOK

Diatonik from Pune is India based dj/producer, Animesh’s techno alter, a name that has become instantly synonymous at the forefront of India’s house music underground.
Since 2010 he has been traveling heavily around the globe playing at the finest of clubs and festivals. With exciting collaborations and hotly tipped releases on their way, the journey has only just begun for him.
Diatonik official
Diatonik at SOUNDCLOUD
Diatonik at Resident Advisor

Stalvart John is a name that has been spiraling up the dance music scene in India over the last few years. With influences ranging from Joey Negro to Acid Arab, his sets are full of eclectic surprises. His recent releases on Wind Horse Records (IN) & Mind Field (UK) are proof of his versatility.
Living in Bangalore (India) he is A&R Podcast and Content Manager at Wind Horse Records, Music Producer/Artist at Stalvart John and Artist at B-side
Stalvart John at FACEBOOK
Stalvart John at SOUNDCLOUD
Resident Advisor
Twitter

YOU CAN BUY IT HERE
OR HERE AS WELL