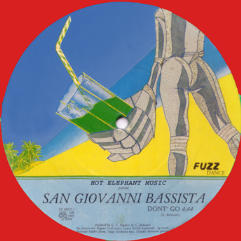 San Giovanni Bassista was a band that brilliantly expressed the humour, the freshness and New Wave energy of the “alternative Italo-Disco” that came out of Florence in the early 80s.

“Don’t Go” ,the band’s biggest hit – a maxi-single relased by Materiali Sonori in 85 – featured: “Don’t Go” on side A and “Hot Socks” and “Summer Sweat” on side B. The first 2 tracks were produced by Arlo Bigazzi, the third by Alexander Robotnick.

In 2003 Alexander Robotnick retrieved “Don’t Go” ‘s 24 original tracks and decided – with his friend Claudio Bonaiuti ,the author of the track – to
produce a new release of the track with technically improved production means than the limited budget original ones. Sadly ,shortly afterwards Claudio suddendly died and the project was set aside.