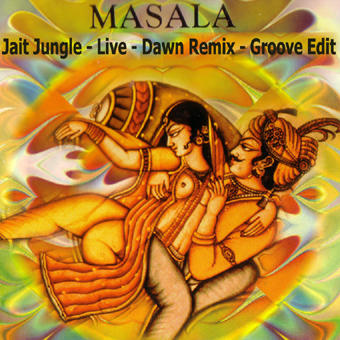 Masala
In April 1998 Maurizio Dami (A.K.A. Alexander Robotnick) and Boliwar Miranda performed “Jait Jungle”live at Controradio, a Florentine radio station. Maurizio Dami played Electric piano and Sampler, Boliwar Miranda
played Bansoori (bamboo flute). Jait is the name of the raga, an early morning one. It’s a fusion of different styles: Indian classical music, Jungle-Drum&Bass, modal jazz and chill-out. We can call it “dubstep” now.
This release includes the original track released by Materiali Sonori + a couple of remixes by Robotnick
Listen to it at Soundcloud
Three musicians (Boliwar Miranda, Maurizio Dami and Ettore Bonafè) with different backgrounds (Indian classical music, electronic music and jazz) develop a research-project that is unaffected by any physical place and time and use different composition tools to do so.

Boliwar Miranda was born in Bombay from a Goan family, hence his name of Portuguese origin.
Despite his Catholic education, he very soon fell in love with Indian classical music and was accepted at the school of an excellent master of “bamboo flute” Hari Prasad Choudury of whom he became the best pupil learning the secrets of that difficult art over a period of several years.
He gradually developed a musical feeling which is closely linked to Indian classical tradition but provided with personal originality.
In 1986 he moves to Italy where he is obliged to take a job which is by no means connected to music. It’s in 1993 that he meets two Italian musicians (Maurizio Dami and Ettore Bonafé) and encouraged by them, feels the need again to continue his musical research.
From 1994 he recorded 3 CDs with Maurizio Dami and Ettore Bonafé distributed by Materiali Sonori. With the above-mentioned musicians he gives several concerts at festivals and cultural events.

Ettore’ Bonafe’ began playing percussion in 1980 (initially he played the guitar taking part in the group “Cartacanta”) dedicating himself in particular to the drums and vibraphone.
He studied tabla in India with the teacher Thunny Lal and in Italy participated in seminars given by Shankar Chatterjee.
In 1982 he began to study drums with Piero Borri. In 1986 he began to dedicate himself to the study of the vibraphone under the instruction of Alessandro Di Puccio and participating in the Berklee summer seminars in Perugia with Gary Burton and later in Switzerland with the teacher and composer Ruud Wiener.
In 1990 along with Paolo Casu he founded the group Fuentes: with which he recorded two albums: “ Garam Marsala “ and “Irikelè”
Since 1992 he has been an original member of Riccardo Tesi’s group Banditaliana with which he has recorded three albums and toured Europe,Canada,Japan and Australia.
Together with the Indian flautist Bolivar Miranda and the composer Maurizio Dami he makes the third member of the trio Masala that blends Indian sounds with electronic music. He also has played for several years with singer\songwriter Sergio Caputo.
He teaches percussion and drums at the Siena Jazz Foundation in Siena.